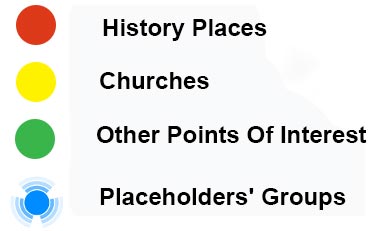 “The old city has preserved substantially unchanged its urban planning. It has got characteristics of extraordinary interest; it is a continuous overlapping of building structures of various ages and of different cultural matrixes. It has narrow, winding streets, a tangle of streets, according to a typology observed in the Islamic world; such varied planning dates back to the first half of the 10th century a. d., a period during which the city was conquered by the Saracens, who dominated it for about thirty years.

A trunk road, Via Antonietta De Pace, divides it into two zones, along the east–west direction, (scirocco and tramontana) according to a classical planning of the Greek cities.

The island is entirely surrounded by a bastioned town wall, which stretches for about one mile; after the Turks’ slaughter of Otranto (1480) and the first half of the following century, the city undertook the construction of defensive structures, to face the constant attacks of enemies.
Of this bastioned wall, which had its core in the Castle, just the low part survives today, since it was demolished to the street level between 1879 and 1887.
A scenic route, the Riviera, open on the site of the ancient walls, allows you to walk around the island, enjoying exciting views. “