This remarkable sacred monument was built in the first half of the 17th century by local workers on architect Giovan Bernardino Genuino’s design. It has got a façade in 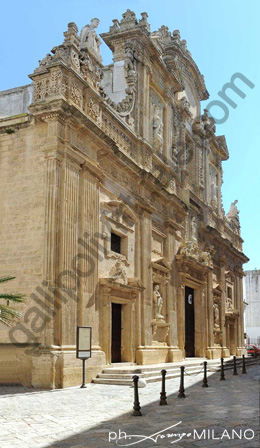 local carparo, which is an example, unique in Gallipoli, of Lecce baroque, banished by the decorative canons that the architect Giuseppe Zimbalo had happily experimented in thirty years of frenetic application, with the result of balancing and harmonizing the existing classic Doric elements with scores having sumptuous baroque phrasing, realized by inserting, next to the gritty and local tuff stone, some ductile and compact Lecce stone.

Its interior develops over three naves

scanned by a colonnade in carparo, with an elegant and sober decoration of carved stone, while the different tones of colour prevail, from the glowing gilding of the finely carved wooden frames, to the exuberant chromatism of the enormous canvases and of the precious marbles. So emerges the colour of over 700 square meters of canvases painted between ‘600 and’ 700 by a group of local and Neapolitan artists, among which we must mention: the local Giovan Domenico Catalano (Madonna delle Grazie – fourth altar of the left nave) and Giovanni Andrea Coppola, one of the major representatives of Puglia’s painting school in the 17th century. (S. Francesco di Paola and Visit of the Magi Kings – second and third altar of the left nave – S. Agata – altar of the transept – S. Oronzo, Assumption and Souls in Purgatory – first second and third altar of the right nave)

The new clock tower was built between 1704 and 1712 next to the Basilica Cathedral, on the square called ‘of the clock’, later named ‘Dante Alighieri’ and now known as Piazza Duomo. 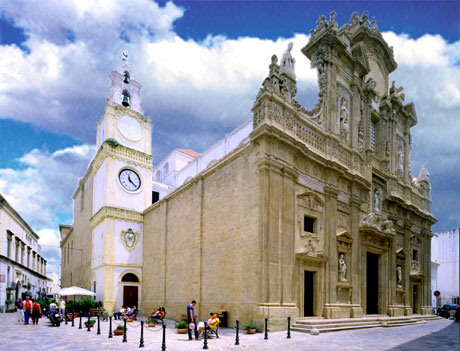 In 1746 another floor was added to the tower and there the bell was placed by the local master Leonardo De Mitri near the existing bell fused by the local master Ragonese Patitari in 1514. The building works were carried out by master Domenico Toma from Copertino and the stuccos by the master Giuseppe Centolanze from Nardò. Both of them had set up house in Gallipoli.
It no longer keeps the ancient machinery built by the Neapolitan watchmaker master Giuseppe Barletta, which had been replaced in the early 1900s. The reliefs in stucco representing the enterprises of the city were made in the trade union of nobleman Sancio Rocci at the end of the 18th century. 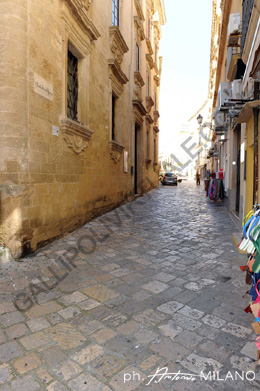 in Gallipoli, Bishop Serafino Brancone fulfilled this idea. The City Council contributed to the constitution of the Seminary with the institution of an annual pension of 300 ducats and the devolution of the assets belonged to the suppressed Basilian abbey of S. Mauro. On 16 March 1752 the foundation stone was laid by master Adriano Preite from Copertino, to whom the project designs are also attributed. The work was completed in 1756 and officially inaugurated in 1760 by Mgr. Ignazio Savastano who had entrusted the direction to his brother, the Jesuit Father Francesco Saverio. The front of the seminary in carparo exhibits mouldings and friezes of the elegant baroque windows replicated in the same years in the first order of Doxi Palace.
Inside it preserves the simple and austere chapel dedicated to the Immaculate Virgin. The beautiful painting of the altar was made by the Murese painter Liborio Riccio who also painted S. Luigi and S. Francesco Saverio. The Seminar was also temporary seat of the municipal museum of Gallipoli until 1898.