The Church was rebuilt in 1838 on the site where the presence of the ancient temple has been attested since 1530, on whose vaults another chapel was built between 1660 and 1714 and both of them were seats of the Confraternities under the title of S. Maria di Monte Carmelo e della Misericordia. 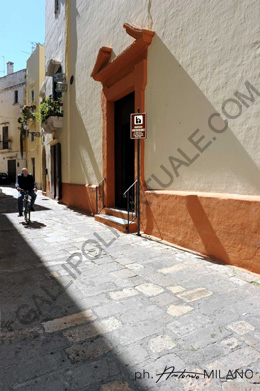 Inside it there is an ancient monolith portraying the Immaculate Virgin and belonging to the ancient temple.

In this Church Our Lady of Sorrows is particularly worshipped; in her honour on Friday before Palm Sunday, since time immemorial, a mournful and pious procession is organized in the town alleys, as well as a traditional “sacred oratory” on Mary’s sorrows and on the Passion of Christ, represented in the various churches of Gallipoli. In its interior, in neoclassical style, there are the venerated wooden statues of B.V. del Carmine and of S. Lucia in paper-pulp and terracotta in a cloth dress, as well as a painting representing the “Deposition from the Cross of Christ Crucified”, attributed by the Soprintendenza ai Beni Culturali to the 16th century Neapolitan painter Girolamo Imparato.

A copy of the painting, made by Giulio Pagliano from Gallipoli, is now in the presbytery of the Church.