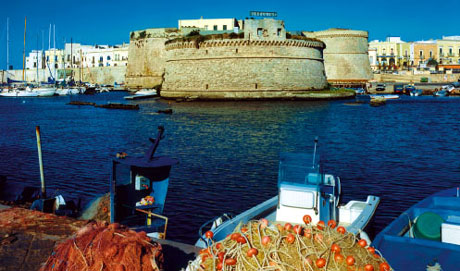 place where the old church stood in the 16th century, administered by the St. John’s Teutonic Knights of and kept in commendam by the Abbot of S. Giovanni of Siponto. It is a jewel of Baroque architecture and inside it imitates the plant and the stone decorations of the Cathedral. It was the seat of a lay Confraternity, today in the Parish Church of Sacro Cuore, and a place of particular devotion to Our Lady under the title of the Visitation. Curate chaplaincy since 1912 it became a parish in 1915. Inside it preserves valuable paintings of the 17th and 18th centuries including a “Santa Lucia” of the local painter Giovan Domenico Catalano and a “Martyrdom of St. Christina” derived from Olindo and Sofronia by Luca Giordano. In the presbytery is now preserved the stone statue of S. Nicola (16th century), coming from the destroyed church of S. Nicola del Porto. Remarkable was the lacunar false ceiling of early 1700s, showing the wooden painted image of Madonna del Canneto, from an original canvas kept in oval in the apse, where you can also admire a fine example of statue in papier-pulp depicting Virgin Mary’s Visitation. This temple is precious to the memory of Gallipoli’s people, who used to practice a rich and crowded fair in July in the opposite square, on the occasion of the celebration of Madonna del Canneto. The church and its wide open space had a lucky illustration with the beautiful engraving made by Martini in 1786 on Des Préz’s design, and included in Saint-Non’s work: “Voyage en Italie”. 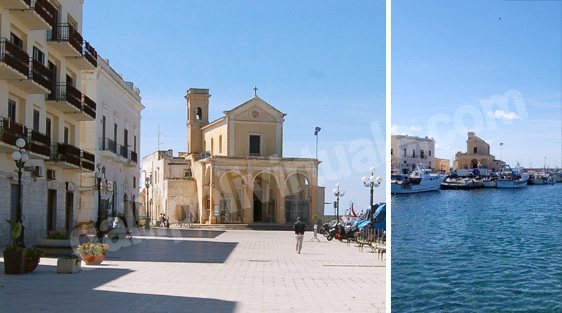 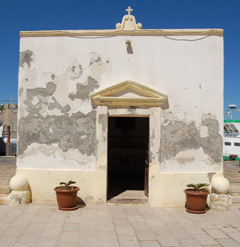 connecting the territory to the city, through a path that, going along the sides of Rivellino, got into the drawbridge of the city gate. It is dedicated to Santa Cristina, the Virgin of Bolsena and inside there was an altar dedicated to her until the 18th century.
Turned to profane use, it has been recovered to worship functions since 1865 and the serious cholera outbreak occurred in the city in 1867 increased the devotion to the Saint, to whom people attributed the miracle of the end of the disease on the first day of the triduum of prayers introduced in that year by the believers.
For several centuries the church remained exposed to the sea force, when the pier did not exist and the waves used to hit with fury the fragile construction, so as to increase in the local people the conviction about the special protection granted by the Saint to this ancient temple.