The Congregation dedicated to Our Lady of Purity was erected between 1662 and 1665 on the rules dictated by Mons. Montoya with affiliates belonging to the “bastasi” class, that is, the dockers. Certainly in those years the current single-nave oratory was created with choir in masonry on the counter-façade and on its under-arches the four Evangelists were painted in fresco. The hall was later enlarged and the new marble altar was built in Roman style, with choir to the side and organ. . 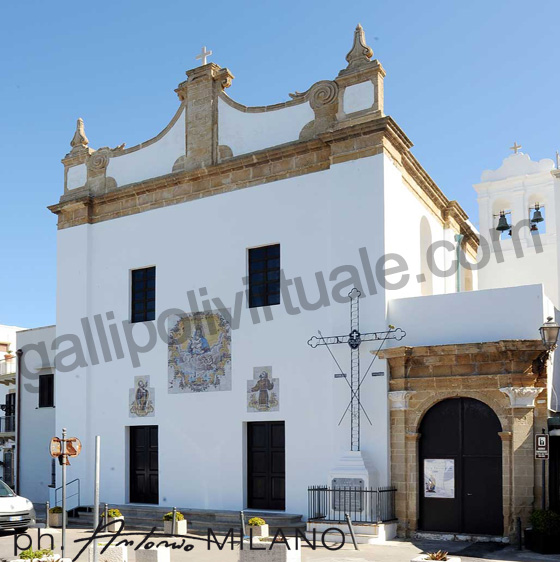 The decorative intervention of many artists and workers today makes this Brotherhood Oratory the symbol, together with the Cathedral, of a Gallipoli Baroque, which was a way of expression in the context of the more extensive and involving experience of Salento Baroque, enhancing and appreciating materials alternative to Lecce stone: wood carvings, pictorial decoration, marbles and majolica in fact had greater and better practicability.

Liborio Riccio from Muro made numerous paintings between 1750 and 1773; among them the multiplication of bread and fish on the counter-façade, the 4 biblical scenes on the sides of the nave and the 4 major prophets decorating the sides of the two choirs on the presbytery. 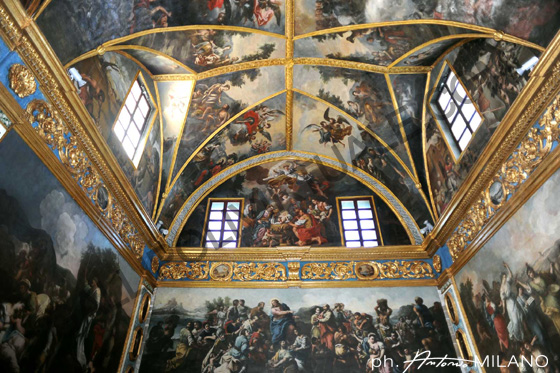 On the altar you can admire the beautiful painting of Madonna della Purità made by Luca Giordano from Naples, based on the homonymous painting made by Louis de Morales, placed in the Teatini Church of Naples since 1641, which had many replicas, starting with the one made by Alessandro Francesi for the temple of the Teatini, in S. Andrea della Valle in Rome.

Very interesting are the wood and papier-pulp statues, including the two 18th-century wooden statues of the Madonna del Canneto and S. Maria della Purità, the one in papier-pulp of S. Cristina, made by De Lucrezis in 1866, the statue of Madonna della Misericordia, dated first half of 800, popularly called the Desolata, which is usually carried in procession around the city streets, at dawn on Holy Saturday, with the coffin of dead Christ beautifully decorated in pure gold. This procession is one of the most intensely lived by local people and it concludes the ritual cycle of the Holy Week.