This Confraternity, today in the ex-conventual church of the Padri Minimi di S. Francesco, was once organized in the ancient oratory located at the foot of the bastion of S. Francesco. Established in 1647 and entitled to S. Maria ad Nives, or of the Cassopo, it had as members some mastri ferrai (master blacksmiths) and as a worship promoter the Venneri, a noble Gallipoli family. After demolishing the old church, because undermined by the waves, in 1813 the confraternity obtained the concession of the present church of S. Francesco di Paola, confiscated by the State following the law of suppression of the contemplative religious orders. 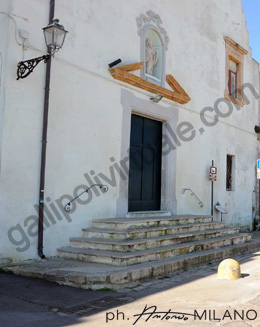 This church was built around 1630 and enlarged at the expenses of the Spanish castellan of Gallipoli Giuseppe della Cueva who built the presbytery, the new high altar and the sacristy. Inside there are seven side altars with beautiful baroque retables in Lecce stone and carved wood, with interesting paintings of the 17th and 18th centuries. The large arch of the presbytery is minutely decorated in pure gold. The painting behind the high altar, depicting the St. Joseph’s transit, is by Giordano’s school. Of the old church remains a graffiti and charcoal “Pietà” and a face of S. Maria ad Nives on wood. On the counter-façade there is the choir, with a 19th century organ.