The municipal library of Gallipoli boasts its constitution thanks to the munificent donation by Canon Carmine Fontò who made public his private library of 2800 volumes in 1825, endowing it with stable goods and a librarian. Between 1864 and 1868 the libraries of the suppressed town convents of the Franciscans, Dominicans, Paolotti and Capuchins were brought together to with this fund.

Initially housed in an autonomous location, the book fund has been placed together with the municipal museum in the premises of the diocesan seminary until 1898. The municipal museum of Gallipoli was established by the naturalist doctor Emanuele Barba who in 1873 had requested the Municipality for the establishment of a “zoological and mineralogical collection”, later transformed into a “Naturalistic Museum” and hosted in the premises of the diocesan seminary. Library and museum were then transferred to the new institute specially designed in 1895 by architect Francesco Barba and built on the site of the ancient Civic Hospital on Via A. De Pace.

The bibliographic collections keep rare editions of the 15th and 16th century Italian and foreign typography, valuable 18th century Neapolitan editions and documents of the history and culture of Salento, including Salento editions of the ‘600 and ‘700, manuscripts and documents from ‘400 to ‘800, iconographic and topographic material concerning the territory and the city of Gallipoli. The museum preserves, subdivided into sections, interesting archaeological witnesses of the Messapic, Roman and medieval ages, nummary collections of classical and modern age, weapons and clothes typical of the XVIII-XVIX centuries, specimens of local fauna and flora, fossils and minerals, shells from all the seas of the world, potteries and earthenware especially of local production. Of notable cultural and artistic value are the 17 paintings of the Coppola collection of the 17th and 18th centuries, the 4 large paintings on wood of painter Liborio Riccio from Muro, the series of portraits of famous men of Gallipoli. The collection of stone inscriptions regarding the city fortifications (16th century) and the port (18th century) is very interesting.

Ex-Oratorio and Church of the Confraternity of S. Angelo

In 1613 the foundation of the confraternity of the Immaculate was established by the city noblemen, who raised the new oratory of the cofraternity on the vaults of the ancient (16th century) Church of Sant’Angelo. This architectural structure is influenced in ideological terms by the refined will of the dominant class of the time, to underline their
social position even in the urban setting.
Planned on the Baroque canons of architect Mauro Manieri from Lecce, it was embellished with stuccos in 1732 and its interior was decorated with 7 clay tableaux decorated in gold and silver (now kept in the diocesan seminary) among which 4 wooden statues were placed representing biblical kings.
The 18th-century marble altar is now in San Francesco d’Assisi’ church, while in the Episcopio there are the large canvas of the false ceiling, painted in 1742 by Francesco de Mura and the 17th-century canvas of the Immaculate with the magnificent baroque golden frame of the altar retable. Today it is the place of the Gallipoli municipal library.
The Confraternity, under the title of the Immacolata and San Vincenzo Martire, was abandoned in early ‘900s. On the ground floor there is still the ancient church of Sant’Angelo dedicated to San Michele Arcangelo, whose stone statue with an Aragonese shield is now kept in S. Francesco d’Assisi. Without any furnishing and altars cloths, today it is the place of the municipal historical archive. 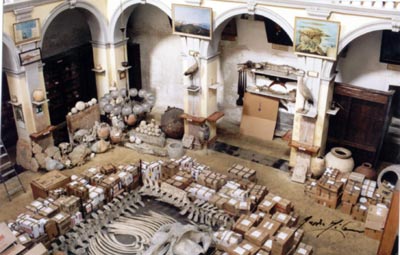