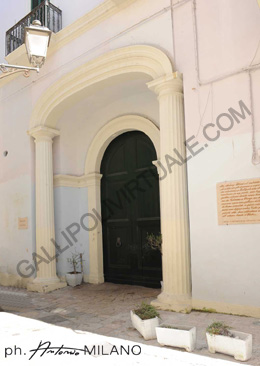 It is one of the most prestigious examples of neoclassical building, of bourgeois commissioning, built by Giovanni, Bernardo’s son, on a design by the local architect Gregorio Consiglio, around the first half of 800. On 27 June 1830, in fact, given the alienation, made by the city decurionate in his favour, of the courtyard, called of the ‘matarazzene’, overlooking (including the one bought that same year by Giovanni from St. Teresa Monastery) many houses inherited from the rich assets of notary Bartolomeo Ravenna, author of ‘Memorie Istoriche di Gallipoli’.
In fact, he had bought Baron Rocco Piccioli’s home and the neighbouring houses that Lucia Crisigiovanni had left to her niece Maria, Nicolò Crisigiovanni’s natural daughter, given as a dowry to her husband Stefano Ravenna, from Genoa.
This building has preserved the sober neoclassical architectural lines of English derivation and it still exhibits, on the vault of the entrance hall, the family heraldic coat of arms.