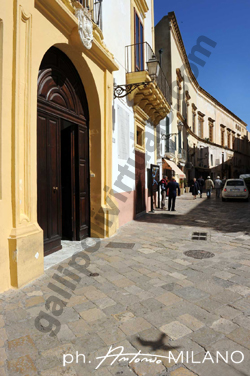 Large part of the block of houses bordered by Via A. de Pace, Via Sant’Angelo and Via Garibaldi and including the former town hall and ex-Palazzo Arlotta, once belonged to the Rocci family, whence it took its name.

In the cadastre of 1742 the entire property is headed to Gaetano, Giovanni, Felice and Sancio.

Giuseppe Rocci, who had married a Sylos, in 1772 alienated in favour of Girolamo Massa part of the property, “consisting of a courtyard with some low ‘lamiati’, a major stairway leading to a hall, three bedrooms and a kitchen with an attic upstairs and an oil mill below these houses, with all the necessary instruments to grind the olives, and a garage below the same house “opening on Via S. Angelo and bordering “at Sirocco on the Palace where he lives, to the west on brothers D’Ospina’s palace, to the north, east and other borders on public roads”.

The rich furnishing of the Giuseppe Rocci’s palace was minutely described after his death in a public deed drawn by Notary Piccioli on 2 Jan. 1779: a Gallery “with templing and friezes around with canvas painting, with 4 large pictures of 6 in 4 in golden frames, with paintings representing Tasso’s ‘istorie’; 8 pictures of 3 in 2 in golden frames , 2 with battle paintings and 6 with sacred stories, 8 small paintings … in golden frames, each with a single personage, and 4 larger ones with flower paintings; 4 long pictures on doors, other 4 small pictures in golden frames with 2 heads and 2 saints”, with more than 70 pictures distributed in more than 13 rooms, with a chapel and a “balcony with columns, and solar warrens”, cellars and oil mill.
Gaetano’s property was inherited by Manieri from Nardò, for Teodoro and Isabella’s marriage, then by Arlotta, who built the current neo-classical façade on Via Garibaldi. Felice’s and Sancio’s assets instead were sold to Nicola Doxi-Stracca whose wife Francesca Storti, in second marriage, brought it as a dowry to Cav. Bonaventura Luigi Balsamo, who gave the overall a modern architectural appearance.It was extensively remodelled and renovated at the end of the 19th century after being purchased by the Municipality of Gallipoli from the last owner Pasquale Personè, with an act by Notary Domenico Mazzarella in 26 June1887