It was built by the Romito family around 1760 to mark prestigiously, in an urban and social context, their pre-eminent role of noble caste, by sizing and placing the Baroque front, of Roman-Bernini style, overlooking the wide open space of the 16th century Venneri Palace.
The city-planning solution adopted at the time of its construction has made this suggestive corner of Gallipoli, lovingly enclosed between narrow and sinuous medieval alleys, a significant reference point for those who want to grasp the full sense of the close relationship between urban space and human activity in the special context of a city-fortress. 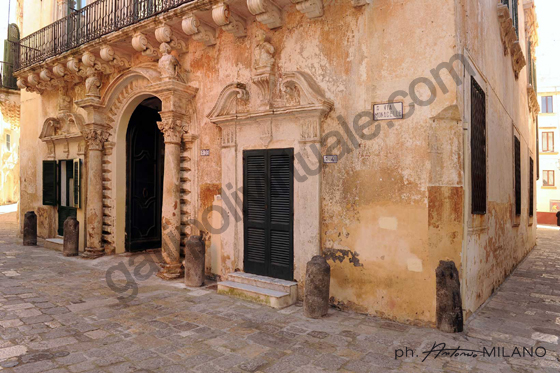 Above all with its four half-length busts placed between the architraved half-frontons of the balcony doors of the low floor and at the top of the columns framing the portal ashlar, the architecture of this building reveals, in the planning phase, a direct intervention of architect Emanuele Manieri from Lecce who, in 1758, had completed the fitting of the episcopal palace in Lecce. Passed in the property of the De Pace family after 1815, now it is owned by the Senape-De Pace family who had, among its major exponents, Antonietta De Pace, Risorgimento heroine, and the deputy Stanislao Senape De Pace