The wonderful baroque front, made of local carparo stone, was commissioned, around 1760, by a rich and noble jurisconsult of the Tafuri family from Matino, with the aim of underlining the prerogatives of his rank in the social and urban context, in a period in which the emerging and wealthy bourgeoisie, devoted to the lucrative oil trades, was beginning to undermine the centuries-old privileges of the city’s nobility. 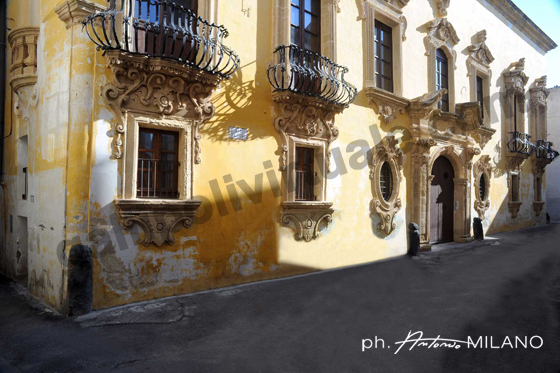 Its baroque lines are influenced by a marked decorative taste that is expressed in a meticulous attention to the details, as in the napped stone fringe, flexuously falling on the edges of the semi-pediments of the portal. In the local architectural context, there is the unusual presence of oval windows graciously framed on the lower floor while the reinforced balconies show a Spanish style.
The ownership of this building remained in the hands of the Tafuri family, who owned it in late 19th century; later it passed to the Renna and today it is held by Colonel Vittorio Cantù.