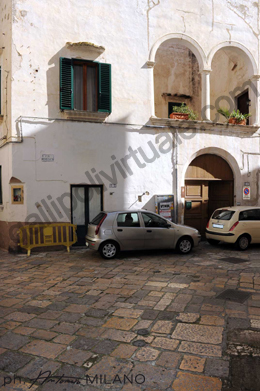 After moving with his wife Celestina Ferraroli to Gallipoli from Naples area, where he was born around the first half of the eighteenth century, Saverio Talamo lived and carried out a prosperous oil business in remote San Giuseppe, between Via Zacheo and Via Incrociata, thanks to the purchase of the houses of a “Carlo Pastena, privileged public Neapolitan shopkeeper” located “in place L’Incrociata, houses of Priest V. Bonaventura Moscato” and then of “the houses of Francesco Antonio Caracciolo which belonged to D. Bonaventura Moscato, place called S. Giuseppe because attached to the Saint’s chapel».
The Talamo was the first bourgeois family to succeed in neutralizing the local nobility’s ostracism; with them in fact they concluded honourable family ties, starting with Giuseppa and Clarice, Saverio’s daughters, who married Francesco Munittola and Giovan Battista de Tomasi, respectively.