A new bridge of entrance to the city was planned in 1601 as a consequence of the separation of Rivellino from the Castle.
It was structurally planned on 12 arches, with a wooden drawbridge at the entrance of the large city gate and was built between 1603 and 1607.
With this bridge, the entrance to the city was actually diverted, because in ancient times people used to transit on the side of the sixteenth century public fountain on Largo del Canneto, and along the Rivellino sides.
Today very little remains of the 17th-century bridge and of its original cambered structure, provided with breakwaters heads and a graceful string-course with arches and braketed bullocks, fatally encapsulated, in late ’30s, in an amorphous bulkhead in carparo on both sides, which had become necessary to widen the road and make it easier for the modern needs of the city traffic. 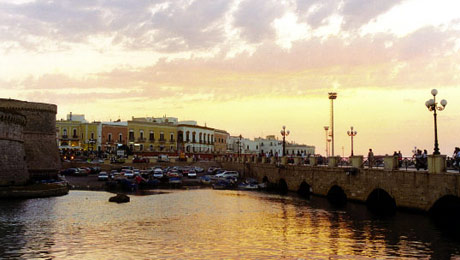