Rivellino and The Castle

RIVELLINO
It is structurally composed of a fortified tower with the function of advanced bridgehead to defend the castle towards the territory, so as to be able to oppose the sieges from the land and to cover the enemy fire with a useful range. These structural and functional features were designed, in late 1400s, by architect Francesco of Giorgio Martini from Siena, who had collaborated with Laurana for the construction of Urbino Ducal Palace and who had followed the Duke of Calabria after reconquering Otranto, with the task of renewing and redesigning the entire defensive system of the kingdom in southern Salento, the most exposed to Turkish aggressions.
The Rivellino, however, was built only a few decades later, between 1515 and 1522, under the Spanish rule of Viceroy of Naples, as a part of an impressive series of works which also included, until around 1580, the construction of the scarped walls of the castle towers and of the curtains and the remaking of the access road to the city.

The Castle
It is a classic fortified building, deeply restored between the 16th and 17th centuries, on a pre-existing Byzantine and medieval structure. With its square plan, reinforced corners and ramparted structures of Aragonese period, it keeps traces of past stratifications. Its structure is reinforced, towards the continent, by a Rivellino with advanced defensive functions towards the mainland. The castle was originally surrounded by a partly navigable moat, designed in 1484 by the Venetians. The entrance was overlooking the city walls with a transit across a wooden drawbridge. Inside you can see the large courtyard and, coming from the entrance door, you can see the ancient chapel on the left and the guardhouse on the right.
Of the original ancient structure are still visible the basements and the casemated walkways of the three angular bastions; the bastion located on the north-east, mighty in size and strong build, has an ennagonal plant, while the one on the north-west no longer exists, because it collapsed at the end of the 18th century. Today, the front facing the city is caged inside the neoclassical building, built in 1881, of the former municipal market. It was anciently governed by a royal Lord, generally of Spanish nationality and  remained in arms until the end of the First World War. Headquarter of financial offices in the 800s, it was seat of the Revenue Guard Corps until about 2000. 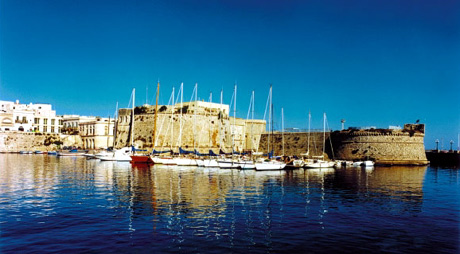