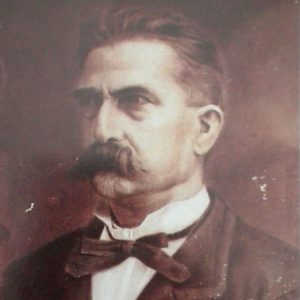 He was born in Gallipoli on 11 August 1819. At the age of 10 he moved to Naples, to his uncles’ Gaetano Brudesini, Counselor of the Supreme Court of Justice, and Tommaso Barba, President of the Great Court. He studied literature and philosophy at Basilio Puoti’s school. Entered the Medical College of Naples by competition, he soon obtained the position of assistant-preparer at the chair of anatomy.
Back to Gallipoli, he practiced as a surgeon, not disdaining private teaching of science and literature.

In 1848, after being appointed Director of the Temporary Hospital, on the occasion of the typhus epidemic, he expressed his great abnegation in the care of sick people. He received praise and public recognition, both renewed with the gold medal offered by the municipal administration, on the occasion of the choleric epidemic, broken out in Gallipoli in 1886.
Engaged on the political front, he put a strong effort in favour of the most disadvantaged and humble social classes, taking an active part in the city’s administrative life and the Risorgimento movements.

For his ideas, in 1852, he suffered exile and prison. After the Unification of Italy, he engaged  in teaching at the local gymnasium and technical school, receiving the appointment of school Superintendent, Councilor delegated to public education and Director of evening and festive schools for adults.
In the field of letters, since his youth he showed a particular predilection for Latin epigraphy, poetry and the local dialect. His works published and those remained unpublished were numerous, including “Writers and eminent men of Gallipoli” and “Proverbs and mottos of Gallipoli’s people”. In the field of science he won particular merit with the foundation of the Zoological-Mineralogical Cabinet,  first nucleus of the civic museum of Gallipoli, which he founded and today is named after him. He died in Gallipoli on 7 December 1887, leaving to posterity an imperishable memory of his great merits as a writer, patriot and man of science.