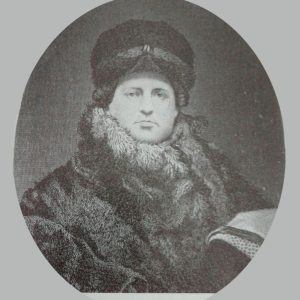 Born in Gallipoli on 22 January 1819, from Pietro dei Baroni of Palmireto and Marcantonia Margiotta, he attended his studies at the local seminary where he took the 4 Minor Orders. In 1838 he entered the Jesuit college of Sorrento and took his vows in Massalubrense Monastery, at the foot of the altar of S. Francesco da Paola, on 11 October 1842.At “Gesù Nuovo” in Naples he taught Italian, Latin and Greek, in  power of the dormitory of the “Convitto dei nobili”. He entered the “Istituto de propaganda fide” in Rome and quickly learnt French, Portuguese, Spanish, German and English, obtaining a doctorate in classical languages ​​and theological sciences.
Father Ruder, General Provincial of Maryland, decided to take him to the Georgetown in Washington, where he improved his knowledge of English for three years. On 23 July 1848 he was ordained a priest and on the following 24 he celebrated his first Mass. In the same year he was sent to Maine in Canada to the Abenaki Indian tribe. During 16 years of intense apostolate it was said to have converted over 30,000 native people to Catholicism.
He was a great scholar of the language used by those populations and in 1856 he published a prayer book in  Abenaki dialect and in 1860 a big compendium of the Holy Scriptures, although he didn’t dispose of an Abenaki grammar book and a dictionary. It was since 1722 that an alphabet of the native language hadn’t beer written, since Father Rale had tried to prepare an incomplete dictionary and an equally imperfect grammar. In 1866 he published the history of Acadia Indian tribes, for which he obtained the title of Patriarch of the Indians. He died in Gallipoli on 23 August 1881