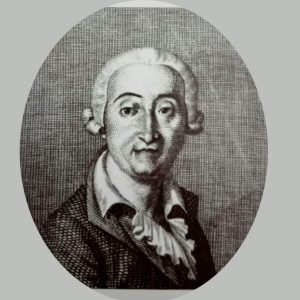 He was a jurisprudent and a man of letters, born in Gallipoli on 2 December 1724 of Tommaso and Fortunata Mairo. Grown up in the paternal shadow, he studied under the guidance of Justin Mastroleo from Alliste, before moving to Naples where he imagined a career in the militia.

Dissuaded by his father, he graduated in law in 1745. Back home, he was Judge of the Royal Court and in 1763 he was elected Mayor, practising good governance and significantly servicing his community.

Convinced of the necessity to reform the juridical institutes of the Kingdom he elaborated a “Philosophical essay of universal jurisprudence” from which came the definitive draft of the “Essay on the oratory of the court”, reprinted in 1825, where he supported the necessity of a criticism against Roman and Byzantine jurisprudence and even more against the one “built over the iron centuries of barbarity”.

In “Response to the apology of torture” he resumed, extending it with references to Genovesi and Beccaria, the controversy that had been his father’s against torture. In 1779 he published “Analytical Examination of the Legal System”, reprinted in 1819 in Naples and later in Venice in 1822.

He argued against Rousseau’s “Social Contract” and the British constitutional system, placing his hopes in those enlightened monarchies capable of developing a broad programme of state intervention in economy.
In 1781 the “Economic examination of the civil system” was published, his most important and well-known work, reprinted several times until mid 19th  century. In the last decade of his life Filippo Briganti devoted himself above all to the composition of various poetic exercises, a translation of L. Annio Floro and numerous acts of piety.