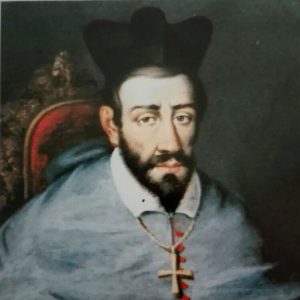 He was born in Gallipoli, in 1599, from a noble and eminent family and there he completed his studies of rhetoric, philosophy and theology. He had a strong priestly vocation and an extraordinary talent for poetry. After moving to Naples, he was appreciated as a talented extemporaneous poet, gaining the title of court poet at the Duke of Osuna, Viceroy of the kingdom from 1616 to 1620. He was disciple of Tommaso Campanella  whom he followed in Rome, where he achieved more fame and esteem. Then he settled in Florence where he published his first sacred poem, “Maria Concetta”, which gave him the flattering title of “Tasso Sacro” from Pope Urban VIII. In 1636 the poem fell under Roman censorship, which forced him to a purged and corrected edition, printed in Naples in 1649 and followed by others. He entered into the sympathies of Grand Duke Ferdinando II, who wanted him as a court poet. In his honor, Coppola composed, in just seven days, “The Wedding of the Gods” (Florence 1637) which, subjected to Galileo Galilei’s judgment, received a flattering acceptance. Set to music by five Florentine composers coordinated by maestro Rondinelli, it was staged on 8 July1637 in Ammannati’s court in Palazzo Pitti, with scenographies by Alfonso Parigi, on the occasion of Ferdinando’s wedding with  princess of Urbino Vittoria delle Rovere. Urban VIII appointed him archpriest of Terlizzi, and in 1643 bishop of Muro in Basilicata. In 1950 he completed “The Cosmos or Triumphant Italy”, a sacred poem dedicated to Ferdinand II, printed in Florence and “The lost truth or The Enlightened Philosopher”, dedicated to Innocenzo X.