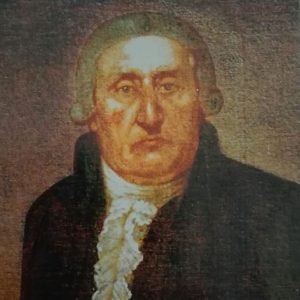 He was born in Gallipoli on 24 June 1720, from a well-off family that entrusted Father Quintino Mastroleo with his care and education. It was doctor Francesco Ruberti who started him off in the medical studies, a path he undertook at the age of 16, moving to Naples, where he followed Prof. Nicola Lanzani’s courses. After graduating and acquiring a fair reputation, when he was just 15 he was accepted to the Rossanese Academy.
Called back home by his father, he practiced the medical art developing his interest in agronomy and on this field he started scientific investigations and practical experiences, in order to encourage the increase and modernization of crops, with particular attention to the quantity and quality of products.

He became interested in the cultivation of tobacco, succeeding in improving both the cultivation and the quality of the final handling of the product.
Quite soon his studies were addressed to olive oil production, from which he obtained some selected samples that he sent in 1786 to Catherine II Empress of Russia, together with a memory, printed in Naples, and “Saggi diversi di olio e su della Raggia di ulivo della penisola salentina…”.
In 1788 he submitted other essays to King Ferdinand IV, accompanied by a “Memory about the sixty-two essays of oil, presented to the Majesty of Ferdinand IV King of the two Sicilies, and a critical examination of the ancient oil mill, found in Stabia”.

On both occasions he obtained praises and rewards.
In 1792 he completed his treatise “About the olive trees, their olives and about the manner to produce oil, whether it concerned the first goal, the maximum possible perfection, or the maximum possible quantity of the same. Giovanni Presta’s treatisy, delivered to the Majesty of Ferdinand IV King of the two Sicilies “. It was published in Naples in 1794 and reprinted twice in Lecce, firstly edited by Romano, and then by Salvatore Grande. There Presta deals with the cultivation systems, the qualities and variety of fruit and above all the methods of oil production. He encouraged and advised daylight oil mills to use the Genovese press and, together with Moschettini, he became one of the greatest expert of this precious culture that has given and still gives Salento so much wealth.
He died in Gallipoli on 18 August 1797.