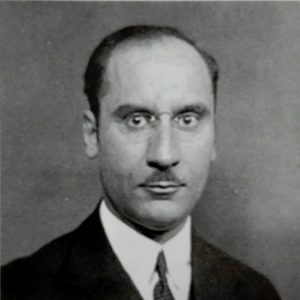 He was born on 19 April 1885 in Gallipoli, where his father was employed at the local customs office. Disciple of Pincherle, Arzelà and Donati, he graduated in Bologna in 1907 with a thesis on approximation polynomials, immediately published in the maths annals.

Pincherle’s assistant for algebra and analytical geometry, he was the winner of the competition about infinitesimal analysis at the University of Parma and later of algebraic analysis at the University of Cagliari.In 1922 in Bologna he occupied the chair of higher analysis and succeeded to Pincherle’s chair of infinitesimal analysis.
In 1925 he received the royal prize of the Accademia dei Lincei, for mathematics. He theorized a direct method for calculating variations, first presented at a scientific congress in Toronto, in 1924.
In 1930 he was called to the University of Pisa, where he assumed the chair of Infinitesimal Analysis and the appointment to teach higher Analysis, despite his adherence to Croce’s manifesto and thanks to the of Giovanni Gentile initiative, at that time Royal Commissioner of Scuola Normale Superiore. He was author of numerous scientific texts (176 publications) and also of school books among which we mention the texts for secondary schools published since 1941 and “Arithmetic and Algebra” for ‘Liceo’ high schools.