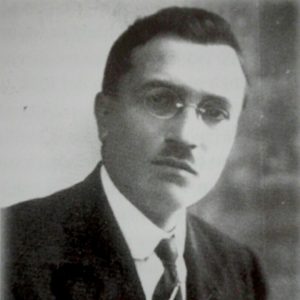 Born in Altamura in 1884, he got a degree in letters in Pisa, where he followed Pascoli’s lessons. He taught in Gallipoli where he met his wife, Maria Piccolo, whom he married on 30 August 1913 and where his first son was born on 11 July 1917. He got interested in social and political issues and, as a convinced interventionist, he took part in the First World War as a reserve officer of the army. He cooperated with Prezzolini’s  “Voce” (Voice) of and wrote two books about war, thanks to his experience side by side with the “peasants” of the south. In 1919 he was among the leading exponents of the Fighting movement and was elected mayor of Altamura. He was among those who contributed to Salvemini’s election to Parliament. From 1923 to 1926 he cooperated with Nenni and Rosselli’s “IV state”, with Gobetti’s “Liberal Revolution” with the well known “Lettere Pugliesi”, later collected in O. Zuccarini’s “Un popolo di formiche” (People of ants). He was an ante-litteram theorist of liberal-socialism. After Matteotti murder he entered the PSU. On 20January 1920 his second son, Vittore, a well-known scholar, was born in Gallipoli.