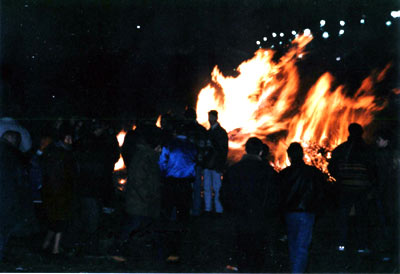 “On the evening of 17 January Gallipoli is enlighted by bonfires, which mark the official start of the Carnival.

‘Le Focareddhe‘ are a fixed appointment for the local people, not to be missed; on the occasion olive branches fallen from the remnant are used and stacked like straw. In ancient times the ash was considered beneficial and was spread by the wind from the top walls, to placate the wrath of the sea, and allow the fishermen a quiet return.

The rite was formerly dedicated to San Antonio Abate too, called ‘Sant’Antoni te lu focu‘ for devotion to the saint, and each family offered for the bonfire, a bundle of branches with great sacrifice, given the financial constraints.

It is also called ‘Sant’Antoni te lu porcu‘: often the saint is depicted with a little pig at his feet, in the various sacred ‘aediculae‘ present in the old town, because he protects domestic animals. “(1)

Legend has it that St. Anthony descended to hell to take fire and bring it to men, proof of the great love and respect it had for both mankind and animals. The symbolism recalls the pagan myth of Prometheus who stole the fire from the Gods to give it to men. 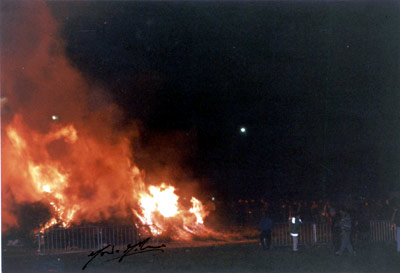 In the past, the bonfires, now extended to the whole city, burned at the crossroads of the streets of the old town and around them local people used to perform wild dances to the sound of ‘pizzaca‘ which, with its symbolic mimicry, presaged the safe birth of loves and engagements. These dances also recall the infernal riddle of the devils dancing around the fire of hell.